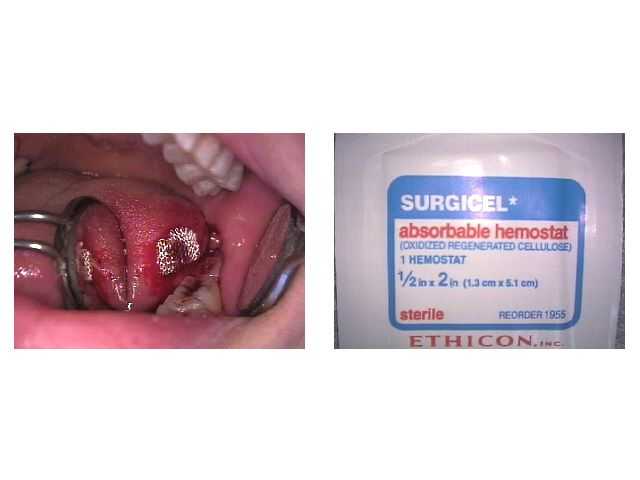 Application of Surgicel,an absorbable hemostat made of oxidized regenerated cellulose, to stop bleeding from a minor cut on the tongue that occurred during operative dentistry. The bleeding stopped in two minutes and the procedure continued.

Complicated dental diagnosis. An atypical bone pattern was noted on a 46 year old female during a routine set of dental x-rays. A Panorex also showed something unusual. A subsequent oral surgeon exam revealed no expansion of lingual or buccal plates. The teeth have not moved for many years though #30 was extracted many years prior. A moderate depression was noted on the buccal aspect of teeth #’s 29 & 30. The patient exhibited mild discomfort in this area upon palpation. A CAT scan confirmed the bone loss and an exploratory surgery was performed. The clinical impression was that of a lateral periodontal cyst. The pathology report showed it to be mildly inflamed fibrous tissue. Note the importance of careful evaluation of bone patterns in regular dental x-rays. 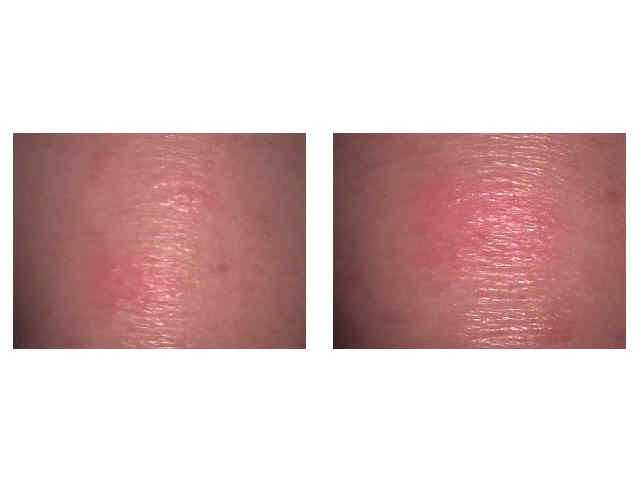 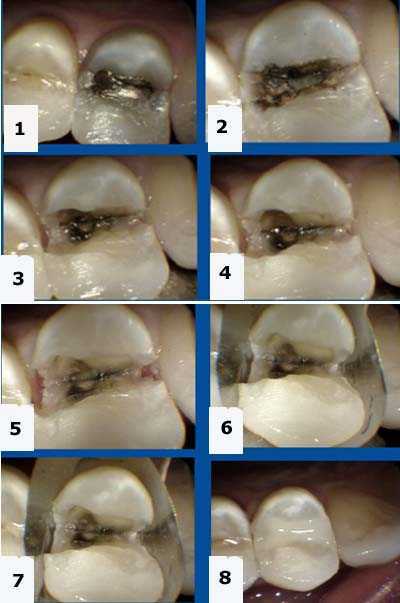 Tooth crack fracture complication, problem. Treatment of a dental cavity demonstrating one method of removing a deep tooth fracture. Note that in the series of photos # 1-8 that the fracture was removed from the outer tooth enamel but remains within dentin. The area around the remaining fracture line within dentin was not soft. The patient was informed about the need to reevaluate this tooth over time for a full coverage crown and possible need for root canal therapy. 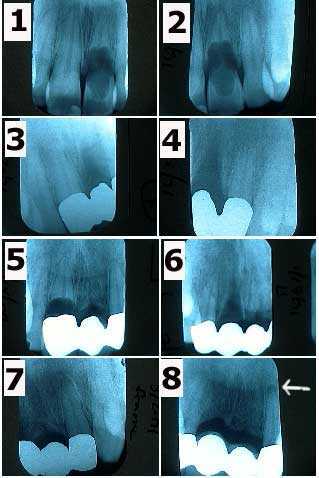 An extreme case of an internal tooth resorption problem occurring within several teeth of a 30 year-old male over ten years. 1) & 2) The patient related a history of trauma to the upper anterior teeth when these x-rays were taken in 1/91. Tooth #9 is undergoing severe internal resorption. 3) & 4) X-rays of the framework of a three-unit bridge in 3/91 following extraction of tooth #9. 5) Tooth #8 exhibiting severe internal resorption in 5/93. 6) & 7) X-rays of the framework of a four-unit bridge in 7/93 following extraction of tooth #8. 8) X-ray of the abutments #7 & 10 in 4/00 shows a periapical radiolucency appearing around #10. The patient was informed of the need for root canal therapy. X-rays in 5/95 & 12/97 had not showed pathologic changes. 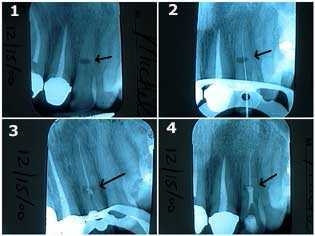 Treatment of internal resorption in an upper left lateral incisor tooth. This 40-year-old female related a history of trauma to her front teeth during a horseback riding accident. 1) The oval-shaped radiolucency in the middle of the tooth length seen in the x-ray is the site of the internal resorption. The patient was informed of the guarded long-term prognosis of the tooth. 2) & 3) Traditional root canal therapy was first performed. The canal space was cleaned and shaped, sterilized with NaOCL, and then filled with gutta percha up to a point apical to the internal resorption. 4) MTA, Mineral Trioxide Aggregate, was then placed into the area of the internal resorption and coronal to it. Keeping the MTA moist will give more working time for condensation of material. [Thanks to Dr. Michael Collura for technical assistance.] 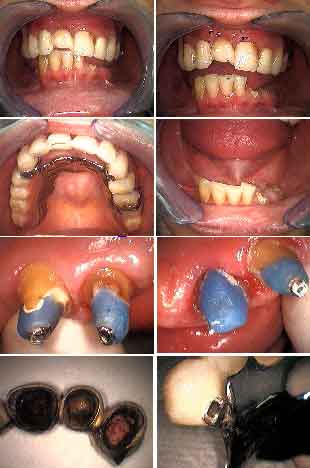 Patient problem. When NOT to treat a dental patient. This patient presented with a loose upper fixed porcelain-metal bridge. Her chief complaint was “to just recement it.” There is obvious decay on the abutments around composite post & cores. Occlusion doesn’t exist. This needs comprehensive care. 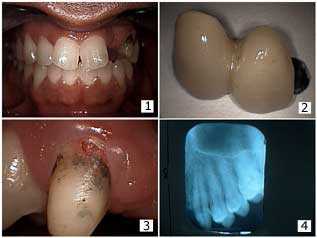 Financial problem. Dental Bridge repair. The patient recently lost his job and could not afford replacement of the bridge. 1) – 2) Patient had a two teeth bridge on an upper canine abutment tooth, lateral incisor pontic and palatal wing attached to the distal of the central incisor tooth. The patient presented with the bridge out. 3) Initially it seemed that there was external resorption on the facial surface of the canine near the gingival margin. 4) Initial x-ray. Photo #1 of 3. 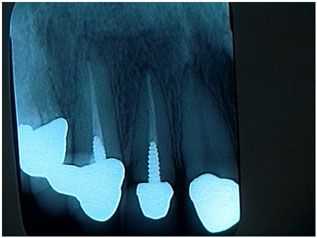 When not to treat a patient. This woman was a very lovely, 30-something year-old who presented for what she believed would be a quick recementation of a single, upper lateral tooth crown. Many dental crowns and root canals were recently completed by her current dentist near her home. She indicated that she had a good relationship with him.
It was recommended that she go back to her current dentist for continuing care because she believed a quick fix was appropriate care. 1) It appeared that the crown is completely seated on the post and core instead of being seated on a minimum of two millimeters of sound tooth structure. 2) The post preparation was short and should have been nearly double its length for strength and retention. 3) The post was prefabricated and not cast; this will also decrease its strength and retention.
I did not want to take out the loose crown and then find that I also had a loose post and core in my hand. Proper care might indicate a new, longer cast post and core, possible crown lengthening, and a new crown. Crown lengthening surgery could likely affect the crown margins on all the other new anterior crowns.
Once you touch it, you own the problem. Both the dentist and patient need to agree what might happen, and what might need to be done, if an “easy” repair turns out to be quite a big problem. This philosophy is both fair and appropriate for the patient and will save a lot of young dentists from having a major, unexpected problem. All things considered it was not worth getting started. The patient was appreciative of my assessment and was happy to return to her dentist for the repair but with new knowledge of her condition. 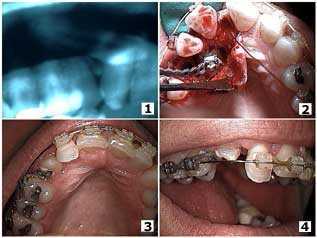 Orthodontic eruption of a palatally-impacted canine tooth. Eleven months after the surgical exposure of the canine. Follow-up before and after pictures. 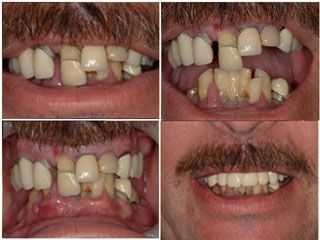 Dental fear complication. Oral Reconstruction performed by a Columbia University dental student in our office. The student, Jared Bowyer, is part of a unique honors program at Columbia.