Bulimia and anorexia cause teeth erosion worse than drinking soda

30 year old female who suffered from Bulimia and Anorexia. The erosion on her lower teeth was from this disorder; her lower teeth were NOT drilled by a dentist. The upper teeth were treated with porcelain veneers three years earlier while they still had sufficient enamel. The lower teeth will now need all ceramic crowns because of insufficient remaining enamel for adhesive bonding. Prophylactic endodontics is also recommended; the pulp chamber may be seen in many of these lower front teeth.

Diet and nutrition in dentistry. This middle aged male patient had bulimia as a teenager but still maintained a very poor diet and exhibited severe teeth grinding.

Oral Reconstruction of a phobic Wall Street executive. Total treatment time was about nine hours in two visits during one business week: Monday (four hours) and Friday (five hours). This patient hid his dental condition for over a decade by never smiling.

In the first row of photos, note that the bite was over-closed due to a prior history of an eating disorder, now controlled, and a current tooth grinding habit.

The patient will have a final porcelain-metal bridge made after the gums heal. Implants may also be placed in the upper right posterior. A bite plate is also necessary to try to mitigate the force of tooth grinding. Referral for pharmacological management of anxiety is also worthwhile. 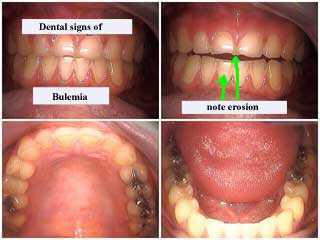 Diet and nutrition in dentistry. Dental signs of bulimia. Note erosion of the teeth. 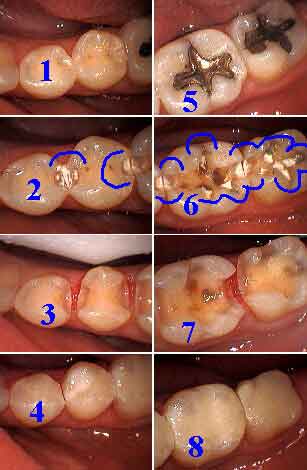 Diet and nutrition in dentistry. Treatment of teeth decalcification. This is frequently caused by oral ingestion of fruit juices and improper oral hygiene.