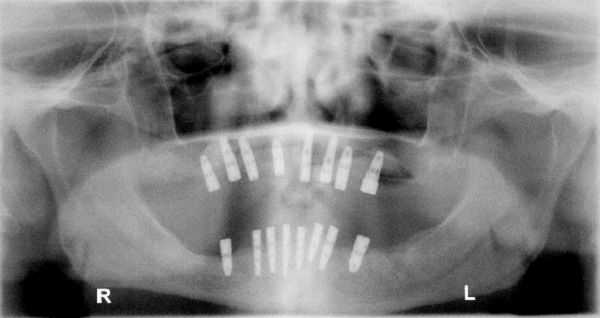 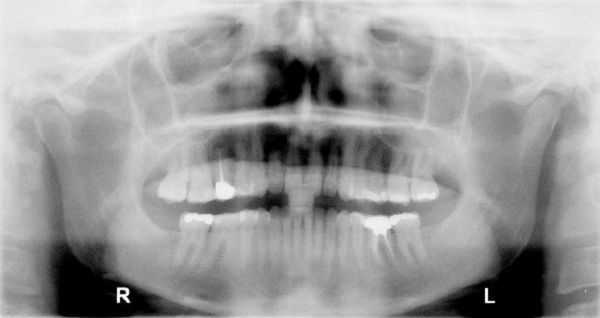 An atypical bone pattern was noted on a 46 year old female during a routine set of dental radiographs x-rays. A Panoramic xray also showed something unusual. A subsequent oral surgeon exam revealed no expansion of lingual or buccal plates. The teeth have not moved for many years though #30 was extracted many years prior. A moderate depression was noted on the buccal aspect of teeth #’s 29 & 30. The patient exhibited mild discomfort in this area upon palpation. A CAT scan confirmed the bone loss and an exploratory oral surgery was performed. The clinical impression was that of a lateral periodontal cyst. The oral pathology biopsy showed it to be mildly inflamed fibrous tissue. Note the importance of careful evaluation of bone patterns in regular dental xrays.

Oral Rehabilitation Dental Reconstruction of a dental fear phobia patient who is a Wall Street executive. Focus on dental radiographs x-rays: a panoramic x-ray and two periapical xrays. Total treatment time was about nine hours in two visits during one business week: Monday (four hours) and Friday (five hours). This patient hid his dental condition for over a decade by never showing his smile.

In the first row of photos, note that the dental bite occlusion was over-closed due to a prior history of an eating disorder, now controlled, and a current teeth grinding habit bruxism.

An Oral Surgery consultation with panoramic xray (second row) was performed prior to treatment to evaluate opening the bite.

The patient will have a final porcelain metal dental bridge made after the gums heal. Dental implants may also be placed in the upper right posterior. A bite plate night guard is also necessary to try to mitigate the force of teeth grinding clenching. Referral for pharmacological management of anxiety is also worthwhile. 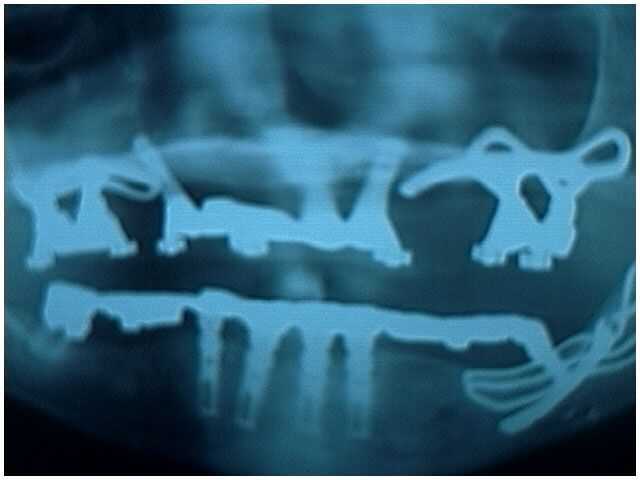