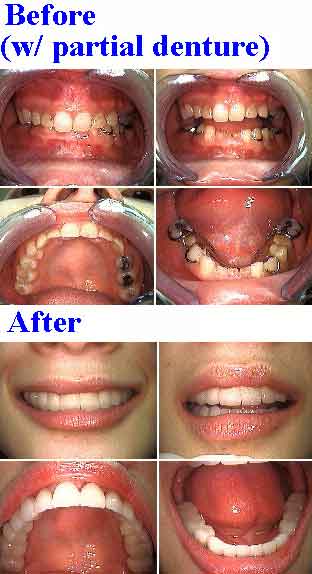 This 30 year old female had many genetically missing adult teeth. As a result she also had retained baby teeth and a closed teeth bite.

Before and after pictures are shown to the left. Treatment involved the placement of  porcelain dental bridges in the upper and lower jaws. Photo #1 of 2. 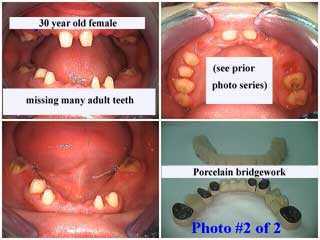 This 30 year old female had many genetically missing adult teeth. As a result she also had retained baby teeth and a closed teeth bite.
To the left partial anodontia is treated with dental reconstruction. It included porcelain crowns for this 30 year old female. She had many congenitally missing teeth.
Partial anodontia is genetically inherited. It involves having less than the normal amount of teeth naturally grow in the mouth. In contrast supernumerary teeth means having extra teeth naturally grow in the mouth. Dental problems can occur by having either too few or too many teeth in the mouth. Photo #2 of 2.

To the left an upper peg-shaped lateral incisor tooth #10 received a porcelain dental crown. Root canal therapy was also performed. Shown are before and after pictures.

Incidentally a peg shaped lateral is also genetically inherited. However  it is not considered partial anodontia nor supernumerary. Instead it describes a teepee-like shape that interestingly commonly only involves the upper lateral incisor teeth.

All of the dentistry shown on this 4,400 page website was created by Dr. Jeffrey Dorfman. Visit us when you want it done right the first time; you will save money by initially spending more. Call The Center for Special Dentistry®.