Before and after photos on how to close a diastema with cosmetic dental bonding performed in our Cosmetic Dentistry office.

This space was closed with cosmetic dental bonding – and the edges of the two front teeth were also evened. This visit took only about 30 minutes and novocaine was not required. 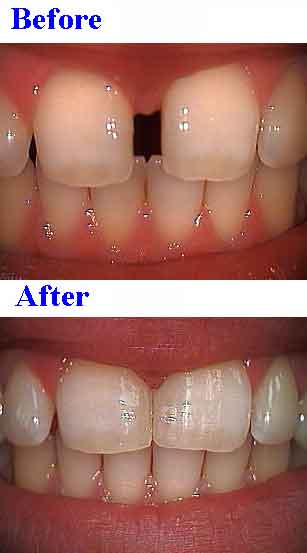 The space between the upper front teeth is called a diastema. This took 30 minutes during one visit without the need for novocaine. A 1 mm channel was prepared in the mesial surfaces of both teeth to add mechanical retention. Bonding was only added to the mesial surface and contoured around the gingival papilla. 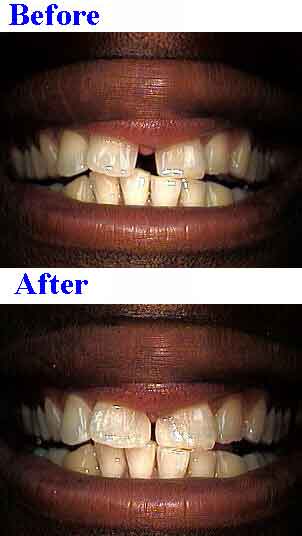 Tooth Bonding to close a space between the two upper front teeth.

When the space to be closed is very large consider NOT completely closing it because it will make the teeth look too wide relative to their length. The dentist should discuss this with the patient before the procedure begins. 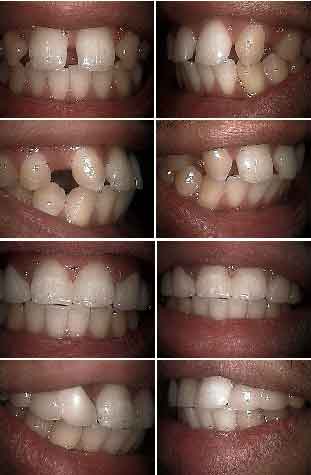 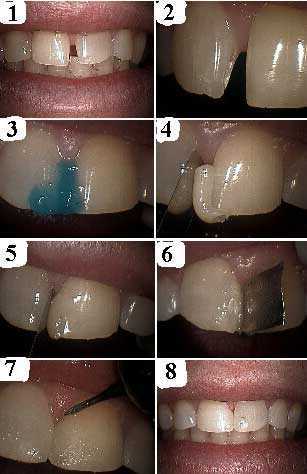 Pictures show how to close a diastema with dental bonding. 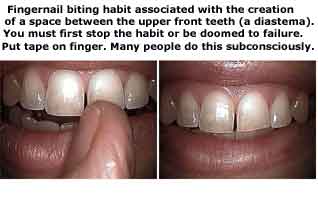 This habit created an upper front teeth gap that required cosmetic dentistry to close and habit control to maintain. 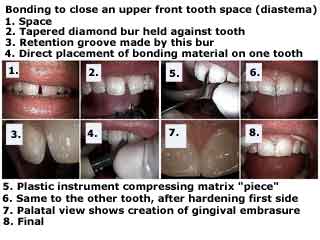 How to close a diastema

Tooth bonding to close a teeth space between the upper two front teeth – diastema. How to technique pictures. 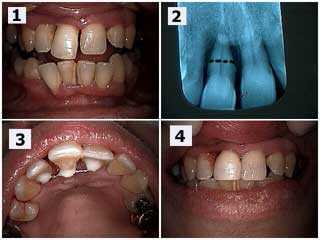 Treatment of a diastema that was increasing and associated with severe gum disease. This new patient’s chief complaint was that the upper right central incisor (#8) tooth was very loose and she did not want to lose it. 1) Upper right central incisor (#8) has extruded and moved labially (toward the lip) and a diastema has resulted. 2) X-ray shows severe bone loss. The black dotted line shows the location for a potential root resection if necessary. Root planing was performed after the splint was placed and the patient will return in three months to reevaluate gum healing and the potential need for the root resection. 3) Palatal photo of the splint between teeth #’s 7 – 9. 4) Post-op photo. The diastema was closed with dental bonding to hide the splint and the incisal edge of #8 was shortened. 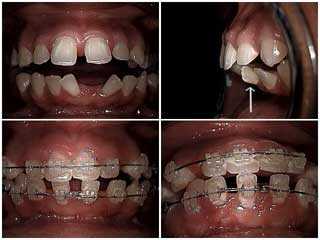 Braces used to close a diastema

Fixed orthodontics braces used to retract severe labial inclination of the upper front teeth and thereby close a diastema! 1) & 2) Pre-operative pictures. Note the upper and lower central incisors. 3) & 4) Following six months of treatment. Again, note the upper and lower central incisors. Note the three teeth connected with wire are being used as an anchorage unit while one tooth is being pulled by the elastic band. 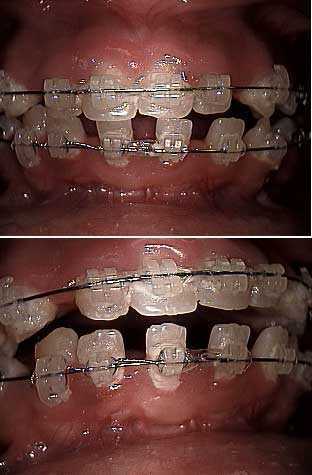 Orthodontics can close a diastema

Orthodontics dental braces can close a diastema – teeth gaps. Braces move teeth through bone like moving a basketball pole through wet cement using anchorage and elastics. Note the three teeth connected with wire are being used as an anchorage unit while one tooth is being pulled by the elastic band. 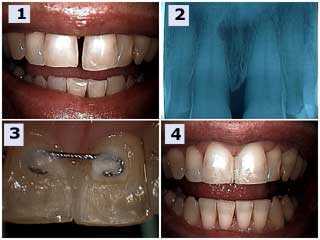 Periodontal treatment to close a diastema

Diastema closure by treatment of a periodontally involved upper left central incisor #9. 1) & 2) Pre-operative photo and x-ray. Note the angular bony defect in the radiograph. The patient reported that the tooth was getting longer and that he never previously had the teeth gaps between his two front teeth. 3) Palatal photo of the dental splint placed between teeth #’s 8 & 9. 4) Post-operative photo one hour later. Teeth bonding placed between the teeth to close the space also hides the palatal splint. The incisal edge of #9 was shortened and the occlusion was checked and adjusted for fremitus. Scaling & root planing was next performed and the patient placed on a three-month periodontal reevaluation. 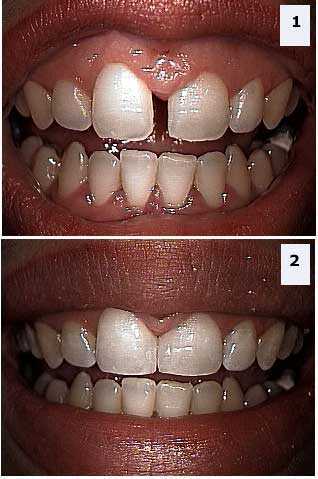 Closing the teeth gaps or space between the two upper front teeth with cosmetic dental bonding. Notice the teeth bonding contours around the gum point or gingival papilla.