We offer our patients many conservative ways to treat tooth erosion. Before and after photos on composite resin for tooth erosion and teeth abrasion performed in our Cosmetic Dentistry office. 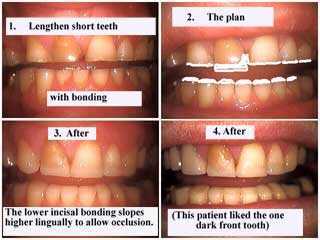 Incisal teeth bonding treats teeth wear associated with bruxism, i.e. grinding. In addition bruxism can lead to abfraction. This is a loss of tooth structure near the gums due to microscopic bending of a tooth along its long axis. A bite plate or night guard is recommended following restorative dentistry. 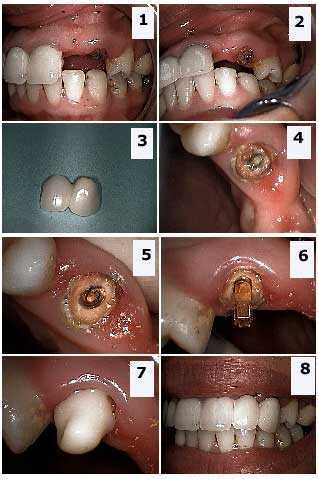 1) – 4) This patient presented with a two-unit (two teeth) porcelain fused to metal bridge that had fallen out. The bridge abutment was on the upper left canine #11 and it was cantilevered in the upper left lateral position #10.

The patient had recently moved to NY and then lost his job in the computer industry. He was financially unable to properly rebuild this area at the time. The patient sought a temporary repair though he knew this would ultimately sacrifice the already badly damaged, and possibly untreatable, canine.

4) The canine abutment had significant decay. 5) The decay was removed from the canine and a post space created. 6) A pre-fabricated post was cemented into place. 7) A chemically cured bonding material was added to the post and the bridge was placed on top, and occasionally removed, during hardening.

8) The bridge was cemented onto this new abutment using chemically cured bonding material. Then a little bonding was also added to the distal of the left central #9 to help support the cantilever during vertical loading. The patient understood  the need for more comprehensive care when circumstances allow. 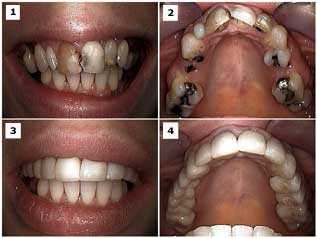 Upper reconstruction of a phobic patient. Tooth erosion was significant around the premolars and molars

The patient was a pretty 33 year-old female. Treatment included a porcelain fused to metal crown & bridge and root canal therapy on all abutment teeth. Then root tip extractions and facial teeth bonding on both upper lateral incisors was performed.

Next the upper anterior root canal and crowns were completed. This demonstrated a new pretty smile to the patient. In addition it demonstrated that it could be accomplished quickly and painlessly.

Subsequently extractions of all hopeless teeth were completed at one time. This was initiated early to allow time for healing before bridgework. Then root canal therapy was performed on the posterior abutments before their preparation for bridgework. The patient experienced minimal post-operative teeth pain.