Before and after photos on periodontal surgery is one type of gum treatment performed in our Gum Disease Treatment office.

Crown lengthening – periodontal surgery – was performed in image #6. #1 – following crown removal this tooth had a cavity below the gum line. Gingival hyperplasia can be seen. #2 – following root canal therapy. #3 – the root canal was reshaped into an oval to prevent rotation of the cast post & core. A gingivectomy was also performed to allow a clean impression for the cast post & core. #4 – the cast post & core with a Kaitlyn Loop & floss. #5 – following cementation of the cast post and core. #6 – A marginal incision was made on buccal side and a 4 mm submarginal incision was made on the lingual side. A distal wedge was removed. Interproximal soft tissue was removed and then 1-2 mm of osseus resection was performed on the mesial, distal, and lingual sides of the tooth. 4-0 chromic gut sutures were then placed. A temporary crown was made and cemented. Periodontal packing was placed last. 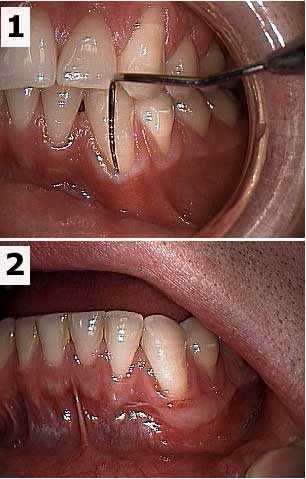 Before and after pictures show a free gingival graft of a lower left canine tooth. A free gingival graft is also called a periodontal or gum graft. It is performed by a Periodontist who uses a scalpel to cut a small piece of donor gum from the palate and then stitches this gum to the recipient site where it is needed. 1) Periodontal probe in the gingival sulcus shows the mucogingival defect in the gums. 2) Seven weeks post-op photo.